Today, as I’m getting ready to send this message to Ruby, a CNN article comes out. I feel horribly small town beside that article! Alas, I have fan questions that demand information. After all, that’s what I do! I found Ruby years ago when listening to an audiobook by Alexa Riley, an amazing author duo who specializes in short sweet and over the top. The epilogue says “maybe I’ll read him the newest Ruby Dixon book, Ice Planet Holiday. He’s been waiting for the latest barbarian book and he loves it when I get to the sex scenes.” Which prompted me to be like “wait- what?” And do my research. And imagine my surprise when I find this amazing series and author has all these books with half naked blue guys. Can you say “add to cart”? Over the next couple days I’m going to post my reviews and thought on the books along with the interview. So, let’s get this started. Ruby thanks so much for stopping in and answering just a couple questions for me and your fans. I have to start by congratulating you! I mean- some of these books came out quite a while ago and now an entire new group of people is quite literally eating them up like a starving snow cat would devour a wounded divisti! Yay for you! How did Ice Planet start? I believe that I read somewhere that it started as a serial, similar to what you are doing now with Corsair.
I was feeling really burned out on everything I was writing! I'd just written a few contracted books for NY and finished a story arc for Bedlam Butchers (the MFM motorcycle gang books I wrote as Ruby prior to aliens) and I was just...creatively wiped. I've learned that the thing that reinvigorates me with writing is to write something 'just for me' and absolutely off the walls. So I pulled out an old alien romance I had started several years ago and put aside, and started working on it again! It did start as a serial - I did one episode a week for 99 cents, and after 6 episodes were out, I put out the 'complete series' in an ebook. By book 3, I had so many people clamoring for the full story that I stopped doing the serials and just released the entire book. 🙂
Speaking of the serial, you seem to write incredibly fast, something I am incredibly grateful for. It’s wonderful to have that knowledge that a favorite author is gonna have a book really fast and you get to have a new chapter of the serial! What’s your writing schedule like? I write 4-6k a day most days. I do write every day, but if I'm super busy, I might only get 2500 in or so. My baseline is 4k for a 'regular' work day and 6k if I'm in the groove. Every day, I write a chapter of the serial (so I can stay ahead of posting) and then the rest is devoted to the current project.
What did you think when all of the sudden you were a TikTok sensation and how did you find out? Did you have friends sending you links like “dude- this chick is talkin bout IPB, and people are going wild!” Or was in an alert from Amazon telling you that you had books on the best seller and you were like “wait- what? Stephs outcast is a few weeks off?”
None of the above! I started getting messages from people saying someone had mentioned my book on Tiktok. I was like, that's nice. Lol. Then my mother told me, no, people are saying you are TRENDING on Tiktok. So I had to download Tiktok to see what was going on, and I was shocked at all the mentions!
Speaking of Steph, I love her. She seems to be very clinical and understanding. She’s also very original for the Ice Planet! When you introduced these characters, did you already know who they were or did you kind of let their stories come to you as they came? (FYI they are introduced in my Favorite book Barbarian’s Rescue. I’ve probably listened to the audio a hundred times)
Oh, thank you! I try to make everyone their own person to a certain extent? But I also allow room for new ideas to hit. I sketch out the character initially and new things happen as the stories progress, which allows me to make them more fully rounded as people as we go on. I knew Raven had a secret and was pretending, but I didn't know why until several books in. I knew Hannah was a control freak, and Devi an enthusiastic scientist, and that Sam is hiding things. Some of them I knew exactly how they'd play out and others were a "What happens if we add this into the mix" sort of moment. 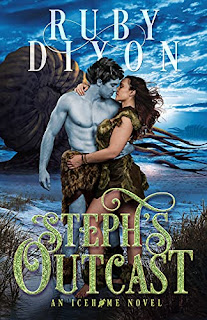 Speaking of Steph, her cover is super sexy and check out that scary beast in the background! **shivers** You are at the end of the series! We have Steph, Sam, Flor, Daisy, and Tia left. Steph is scheduled at July and Sam in September. There is the mention of Icehome November, but no character. How does it feel to be almost done with Icehome?
Nooo, don't tell me we're at the end! It makes me want to drop an entirely new boat of people onto the planet. I love all my characters and want to keep playing in that world forever, but that's probably unrealistic. Steph is next, Sam the month after next (I did a vote on Facebook and that was the book people wanted most!) and then the last three will be scheduled in for 2022, but I'm not sure of the exact timing yet. Tell me there’s more Ice Planet to come… Are gonna get all the kids stories?
I definitely want to do a 'next generation' storyline and I'm starting to get some plot ideas for it! It just depends on if readers are into it. :) But that's for future me to worry about! Right now, I'm just focusing on the current books!
You can get Ruby’s upcoming releases here. There’s more than Iceplanet out there!
Did you enjoy this? Awesome! Follow @audioloversblog on Facebook. Remember, today is someone’s best day ever somewhere out there and smile for them. Until next time, love and hugs.
Alien Author Q&A Ice Planet Barbarians Ruby Dixon

Immortal Angel An Argeneau Novel By Lynsay Sands Release Date- 9/22/20 Review Date- 4/17/20 Publisher Summary- In a sizzling new Argeneau novel from  New York Times  bestselling author Lynsay Sands, a gorgeous mortal encounters his greatest temptation… For almost a century, Ildaria Garcia has been on the run, a trouble magnet with a knack for taking down bad guys. Lately, her vigilante tendencies have drawn unwelcome attention to her fellow Immortals. Forced to relocate, Ildaria is supposed to lay low in a new town. Instead, she quickly entangles herself with six and a half feet of muscular, tattooed trouble. Joshua James Simpson Guiscard, aka G.G., knows a lot about Immortals—enough to make him wary. Yet from the moment Ildaria walks into his club, he feels desire stronger than anything he’s known. Accepting the fact that they might be life mates is disconcerting. But when her past catches up to them, G.G. faces a choice—confront his demons at last, or lose a passi
Read more