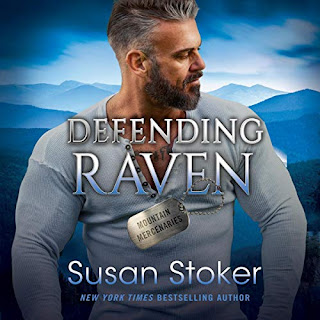 It’s been ten years since Rex’s wife, Raven, disappeared from a Vegas casino. Never losing hope, he even formed the Mountain Mercenaries to help find her - and other missing wives, sisters, and children. Now Rex and his fearless team are following a lead to Lima, Peru, where the rescue operation is greater than they imagined.

A day at a time. That’s been Raven’s motto for a decade. Once held captive by an elusive sex trafficker, she has an indomitable will to survive. But Raven’s not ready to leave Peru. She can’t. Not yet. Because her liberation from the barrios comes with devastating consequences. One wrong move and all hope will be lost to an unimaginable hell.

For the Mountain Mercenaries, the stakes have been raised. The threats are escalating. But Rex hasn’t searched this long, risked so much, and come this far to lose Raven all over again.

©2020 Susan Stoker. (P)2020 Brilliance Publishing, Inc., all rights reserved.
Audiolover’s Review
I was excited to have Rex/ Dave’s story. I don’t wanna give anything away so I’m going to hold it all back.
Raven/ Mags is amazing. Her story and strength is unforgettable. Her ability to care and overcome is everything.
Dave/ Rex’s love for her is perfect. He’s understanding and dedicated.
The bad guy is so horrid. He’s the best of all the bad guys in this series. I hate him so much.
Stoker has a great ending for this series and I was so happy for it.
Stella Bloom was fantastic. Her voice is perfect and I often feel like she was the characters in these stories.
Remember to follow @audioloversblog on Facebook and Twitter for more expanded reviews author interviews and maybe find something new!