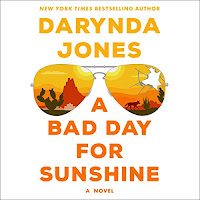 
Sheriff Sunshine Vicram finds her cup o’ joe more than half full when the small village of Del Sol, New Mexico, becomes the center of national attention for a kidnapper on the loose.

Del Sol, New Mexico is known for three things: its fry-an-egg-on-the-cement summers, its strong cups of coffee - and, now, a nationwide manhunt? Del Sol native Sunshine Vicram has returned to town as the elected sheriff - thanks to her adorably meddlesome parents who nominated her - and she expects her biggest crime wave to involve an elderly flasher named Doug. But a teenage girl is missing, a kidnapper is on the loose, and all of this is reminding Sunshine why she left Del Sol in the first place. Add to that the trouble at her daughter’s new school, plus and a kidnapped prized rooster named Puff Daddy, and, well, the forecast looks anything but sunny.

But even clouds have their silver linings. This one's got Levi, Sunshine's sexy, almost-old-flame, and a fiery-hot US Marshall. With temperatures rising everywhere she turns, Del Sol's normally cool-minded sheriff is finding herself knee-deep in drama and danger. Can Sunshine face the call of duty - and find the kidnapper who's terrorizing her beloved hometown - without falling head over high heels in love...or worse?

So, I was expecting something from this book. Something hot. Something very First Grave/ Charlie Davidson hot. I just want to tell you now- I didn't get that. What I did get was an alternating story that came from the POV of Sunshine and her child, who is a teenager, filled with some mystery and intrigue from several different stories that intertwine into a beautiful story (I mean, beautiful for a fictional sheriff). Every second of this story left me wanting more and more from both of these woman.

Now, for our teenage girl. Our fourteen year old beauty who can run the town if she isn't stopped because she is that determined. Auri is special. She is the unique kid that actually thinks about what she is doing before doing it. She is the kid that, in three years, we will see leading people through the dystopian world for the water that might exist across the vast desert. Auri is worthy of the chapters that are written from her POV in every way.

Dual POVs equals something that you will love if you love Young Adult books and also Love regular old main stream fiction. That is? Two separate love stories. A love story for our little girl with the shy and almost too attractive for his own good fifteen year old. A love story for our Sheriff mom who is still attracted and slightly in love with the bad boy from her own teen years.

There is one main mystery that this book revolves around. There is a teen girl missing and that teen girl is on borrowed time, it seems. I don't do spoilers but I honestly didn't see it coming until the literal end. I was sitting in my kitchen and literally said "What. The. Hell?" Because I just didn't see it happening until the last second. Now, my original thought wasn't far off but it was still pretty dang far off. So, there isn't a lot of "HAHA Saw that Coming."

There is a supernatural element to this book. There is a moment in the beginning when you get the whole "Wait- so is there a supernatural reason that she is sheriff?" but that isn't what actually convinced me of it. Nor were the muffins that predict the future. I'm a southerner. We will say that we feel something is comin and bake and to me that's a self fulfilling proficiency. There are a couple little weird things in there that made me question if there was or wasn't but it is never blatant. However, there is a part at the end few chapters when I was like "Oh, okay, so if that's not supernatural then what is it?" Even that? It isn't definitive. So, this is an opinion of this lady. ;)

I know that there is more that I should say in this but I just can't help but end it here. With this note.

Sunshine and Auri are two amazing females who will completely ruin us for both Young Adult and Contemporary Mystery Heroines in one book.