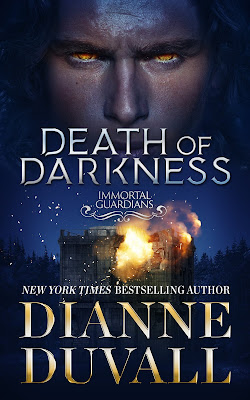 I didn’t want to say this but unlike other fans, Seth’s book scared me. What was it going to be like for this father figure who was thousands of years old to find love? What was this man who I even see as the adults of all adults going to be like hearing about him having sex? Well y’all, it only took me about six minutes to figure out that I was an idiot.
Seth and Leah are the ideal couple. I adore her. I adore them dancing together and watching television together. Watching Seth fall in love was addictive. I wanted more and more of it and I was jumping up and down rooting for them by the end I was in tears of happiness.
Now, there were twists and turns that I didn’t see coming. I know that, at one point something happens, and I made a very unladylike noise followed by more unladylike words. There were also times I was jumping up and down screaming with excitement and joy, both on the inside and outside. The only thing I can say is GIVE ME MORE DIANNE DUVALL!
There are questions answered but every one answered has another one to pop up in its place. Every new question makes me want more. Can I bribe her to write faster?

Kirsten Potter is amazing. She allows you to get lost in the story and almost forget she’s the only one performing.

Follow us on FB @audioloversblog for interviews and happy thoughts about books and a great way to discover authors that, hey, you may not discover.
Dianne Duvall Vampire